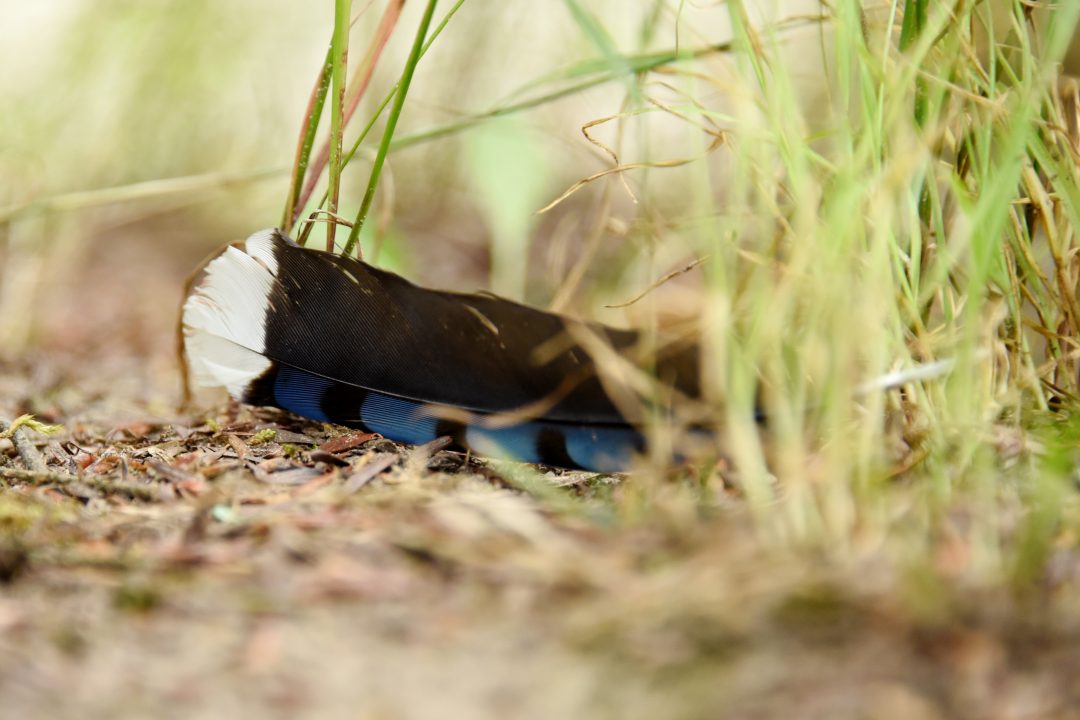 The Mystery of the Feathers

Join Elizabeth Baumeister, journalist and photographer, for a suspenseful walk along a Northeastern Pennsylvania (NEPA) trail as she uncovers the Mystery of the Feathers.

This week’s column by Elizabeth Baumeister, “Northeastern Pennsylvania Birder,” takes you on a spellbinding walk along a local stream. Whether you venture outdoors regularly snapping photos of feathered friends you meet along a walking path or hiking trail; ornithology, also known as birdwatching, continues to grow in popularity. There is no shortage of forests or backyard birdfeeders in (Northeastern Pennsylvania) NEPA. You can find more information or search for a group in your area through the National Audubon Society.

I was walking alongside the stream at Lazy Brook Park in Tunkhannock a couple of weeks ago when I came upon a murder scene.

A pool of deep red blood-stained the earth and was surrounded by dozens of bright blue, black and white feathers. A body wasn’t present, but I knew there was no way the victim of such a gruesome attack could have survived.

An initial investigation revealed the victim as park resident, Blue Jay. Although I was unable to identify the murderer, I suspect he or she bears the name of Hawk. One possible witness by the name of Red Squirrel watched me from behind a nearby tree, but he refused to come out and talk (probably for fear of becoming the next victim). After taking some crime scene photographs, there was nothing else I could do. So I continued on my walk, pondering the circle of life.

When I was a little girl, I engaged in all sorts of daydreams — from realistic to radical —  about what I would be when I grew up. Among the more far-fetched of these aspirations was the occupation of detective.

I devoured mystery books. After exhausting the local library system’s selection of “Nancy Drew” novels, I moved on to the “Hardy Boys” books. From there, I read the “Mandy” series and every other children’s mystery book I could get my hands on.

I eventually settled on the career path of journalism. But in a way, those childhood daydreams of detective work are realized in one of my favorite hobbies: birdwatching.

And I’m not just talking about the mess left behind by a hawk during its lunch break on a recent summer afternoon. Birdwatching — whether in one’s backyard or in the field — is full of detective work. For example, to identify a bird species, consider a wide range of questions and clues:

Any of these questions can turn out to be important clues in distinguishing one species from another.

For me, birding isn’t just a hobby. It’s an adventure. And the most thrilling part is seeing and identifying a species for the first time and adding it to my life list (a birder’s means of tracking all the bird species he or she has seen in his or her lifetime).

I am writing this guest blog series for the purpose of sharing that adventure with readers from Northeastern Pennsylvania and beyond. I hope you’ll join me as I solve mysteries, learn new ornithological facts and explore birding hot spots in the region, surrounding regions and sometimes outside the state.

Don’t leave my site so soon. We’re committed to bringing you a variety of high-quality travel-related and outdoor recreation stories and information. Check out a companion story.