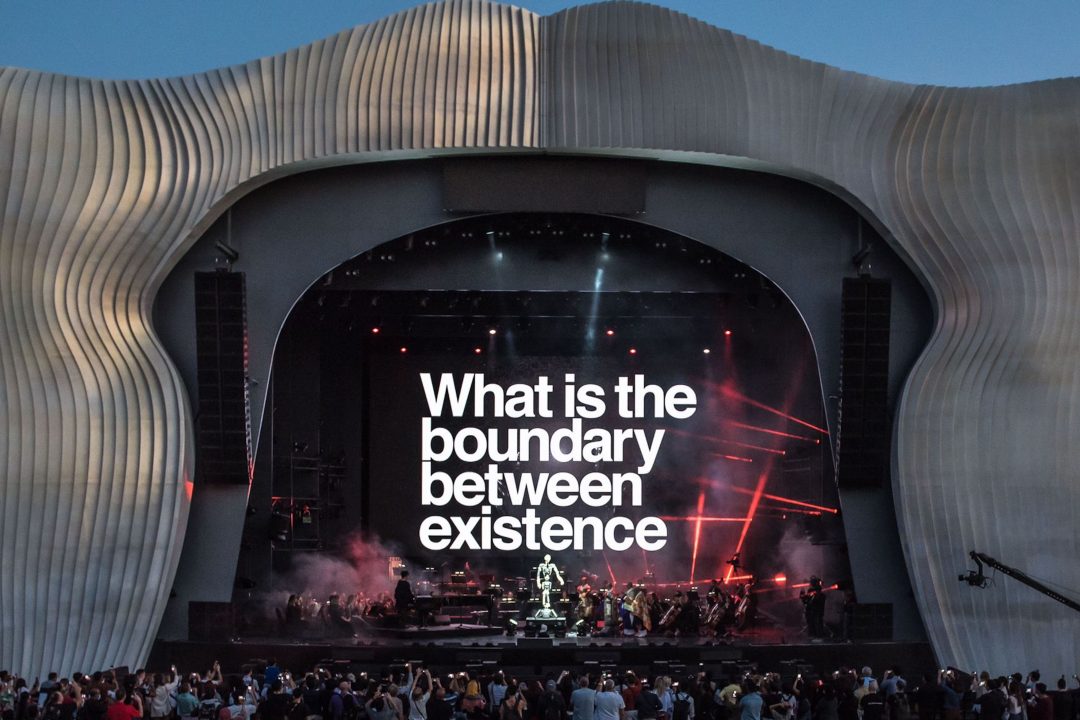 Exploring the Border Between Humans and Technology

On the Road Home from EXPO2020 Dubai

Japanese Musician and Composer Shares His Music with the World

Keiichiro Shibuya creates music that can be shared with anyone internationally.

Shibuya, an acclaimed Japanese composer, and musician brought his global vision to EXPO2020 Dubai, a World Expo, hosted by Dubai in the United Arab Emirates that ran from October 1, 2021, to March 31, 2022. Shining a bright light on Japan’s musical and technological accomplishments was one of his goals throughout the six-month event.

“I would be happy if people knew that this kind of thing came from a Japanese person,” Shibuya said.

Shibuya performed the Android Opera “MIRROR,” an international and cross-cultural collaboration between the Humanoid Robot, Buddhist chants in Japan, and NSO Symphony Orchestra (UAE) at the expo on March 2, 2022.

If you missed Shibuya’s Expo debut; at center stage, the android, Alter3, improvises and sings a text created by AI (artificial intelligence) surrounded by four monks singing Buddhist chants that back 1,200 years. Surrounded by a local UAE (United Arab Emirates) orchestra, the musical piece evokes the unification of piano, computer, and voice. Watch his performance here.

Keiichiro Shibuya creates his music to explore the border between human beings and technology with a broad range of works such as piano solos, electronic music, and opera.

Technology and Tradition = Diversity and Tolerance

You might ask how the diverse audience received the fusion of tradition, modern, and the future all on one stage.

“I believe that Dubai has such diversity and tolerance to accept these strong contrasts,” Shibuya said via an email interview. “By the way, Dubai Expo was my first experience of Expo – which was amazing.”

And performing at the EXPO offered Shibuya many opportunities to experience a multitude of cultures. What contrast stands out?

“…Dubai is much more international. Everyone speaks English and many nationalities there. Japan has to learn so many things from Dubai. I was surprised that my friends in Dubai know about the Japanese culture and architects very well…”

When he wasn’t performing, Shibuya spent his free time sightseeing and taking in Dubai, a Persian Gulf hub known for its luxury lifestyle, lively nightlife, and state-of-the-art architecture.

“I visited my local Emirati twins’ friends and stayed at their fireplace. I went to Women’s Day by Cartier at (the) expo (the 15th Anniversary of the Cartier Women’s Initiative) and the Dubai art fair (Art Dubai) for my endeavor of inspiration,” he said. “Of course, I also went to Dubai mall for shopping like Balenciaga and Celine. Also visited The Museum of the Future and had a meeting with them so I’m wishing to make concerts there.”

As he looks to expand his touring schedule internationally, Shibuya said he is especially interested in exploring new opportunities in the Middle East, Europe, and the United States, and invites promoters to reach out to him.

“So if you have any requests for performances, please contact us. This production is not for a one-time Expo. I want to perform it again in the Middle East, Europe, and the United States,” Shibuya said. “I will keep upgrading it, just as I have done with other productions. We are especially looking to expand like touring in the Middle East.”

An Eye on the Future

What’s in store for the future? Shibuya noted that as his research and collaboration with AI & Android continues as his key focus, in April 2022, his Android and music laboratory will be established at a Japanese university, and he plans to unveil his new Android Opera at the 2025 Osaka Expo.

“We would like to do a tour of this MIRROR by then. There will always be an android in the lab, and from there we will travel around the world…”

But his accomplishments don’t end there. In August 2021, Shibuya released a new opera, “Super Angels” with Conductor, Kazushi Ono, and Writer, Masahiko Shimada, at the New National Theater, Japan. In the last 15 years, Shibuya has collaborated and developed stereophonic sound with various artists and scientists such as Hiroshi Sugimoto at the Palais de Tokyo in France, Hiroshi Ishiguro, a robotic researcher, Jérémie Bélingard, Etoile of Opéra de Paris, and Takashi Ikegami.

September 2019 brought the Buddhist Chant: Shomyo + Electronic sounds, “Heavy Requiem” through collaboration with Japanese traditional monk, Eizen Fujiwara, at Ars Electronica in Linz, Austria, and in 2018, he released the Android Opera ”Scary Beauty,” a humanoid android in which AI conducts a human orchestra and sings with them. Shibuya released the Vocaloid Opera, “THE END,” in 2012, starring Hatsune Miku, without any human beings.

EXPO 2020 Dubai offered artists like Keiichiro Shibuya the stage to entertain and enlighten and revisit the past and experience the future from October 2021 to March 31, 2022. If you weren’t able to attend the expo but would like to learn more, visit virtualexpodubai.com.

Who designed the EXPO 2020 Dubai Japan Pavilion? Learn more about the Japanese architect behind this magnificent welcome center.

Add EXPO2025 Osaka to your calendar. Visit the official website to learn more about the event.