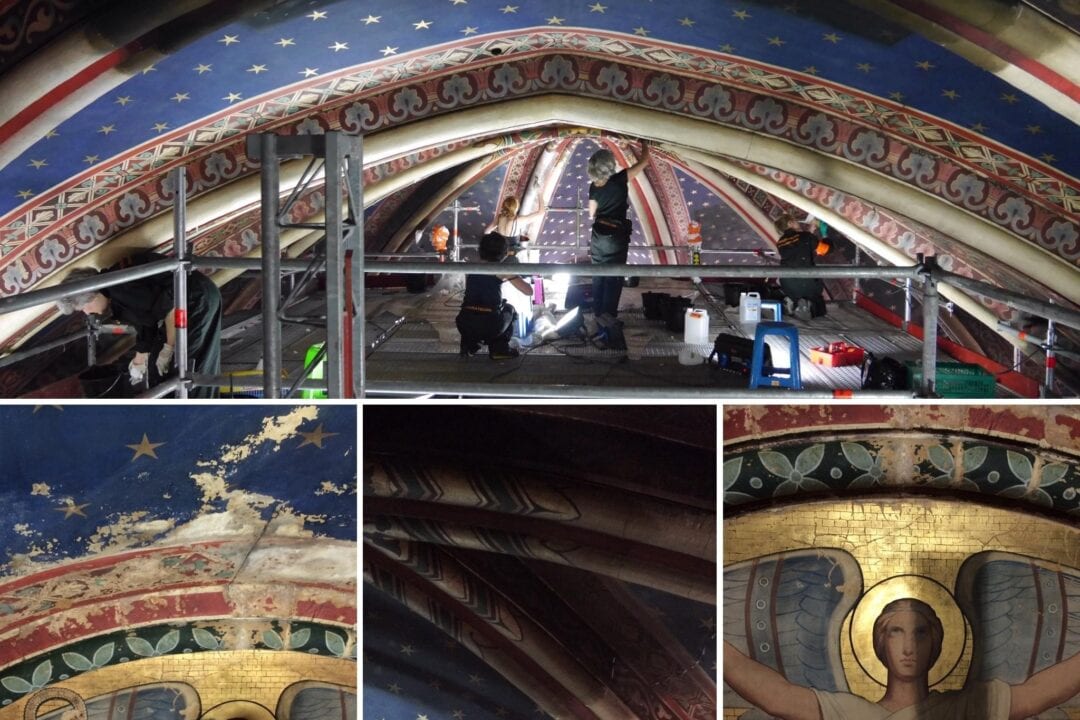 Tourists looking for must-see Paris architecture and history in the making should plan a stop at Saint Germain des Prés, Paris’ oldest church.

“Just go. Go and visit the church and you will be able to see now what the works have accomplished and what they will provide in terms of linking us to the past and the future in ways that surpass our ability to merely explain in words here.” David Sheppe

David Sheppe is leading the current “Adopt A Saint Germain Star™ Campaign in the United States. The AFPSGP is a 501(c)(3) charity devoted to United States fundraising efforts that support the Saint Germain des Prés church restoration project that began in 2012.

Read my interview with David to learn more about the organization’s collaboration with its French counterparts, The Preservation of Saint Germain des Prés Foundation.

“The church is today in serious need of renovation and restoration owing to the ravages of time, use, and under-funding.” David Sheppe

Q & A Interview with David Sheppe

What is the history of the Saint Germain des Pres? Why is it must-see Paris architecture?

There has been a church or abbey on the same spot in central Paris since the founding of Saint Germain des Près by Childebert, son of Clovis, the first Frankish King, in 543 AD. The current structure is one thousand years old. Today, it remains a vibrant parish and community in the heart of Paris’s most resonant neighborhood.

Two previous church structures were destroyed by Viking and other raiders in the eighth and ninth centuries. The current church, finished in 1014 AD, is unique in France as it is an amalgam of Romanesque architecture and multiple pre-Gothic and Gothic influences.

For many centuries SGP was the home to the Benedictine order of monks who were renowned for their religious and secular scholarship and who was instrumental in the founding of the Sorbonne in the 13th century. The church was the site of the publication of the first Bible in French (as opposed to Latin) and became a center of publication and research during the entirety of the High Middle Ages in France.

Victor Hugo was instrumental in saving the church from being razed by the city authorities in the early 19th century and was the driving force to a major renovation undertaken soon thereafter. Another renovation was undertaken in the 1830s and 1840s – the last renovation before the project now underway in our time. A key contribution to the restoration in the 1840s was the work of Hippolyte Flandrin, who painted a series of massive murals lining both sides of the nave that are now undergoing significant restoration work.

Much of the current church is original and there are several vestigial pieces of the ancient predecessor churches dating back more than 15 centuries. There are two original stain glassed windows in the church that are 800 years old and have survived endless imprecations and assaults over time. (Two further original stained glass windows are in the United States – one at the MOMA in NY and the other in the Walters Museum of Art in Baltimore.)

In 1860, the church was granted full Monument Historique classification and is therefore provided with full landmark preservation status. The church is today in serious need of renovation and restoration owing to the ravages of time, use, and under-funding. 85% of the budget for renovations must come from public hands as, quite simply, the City of Paris (which owns the structure) does not have sufficient funds to meet the restoration needs of all churches in its care.

The current restoration project was launched in 2012 and, funding permitting should be completed in 2021 or 2022. The French fundraising committee and American Friends for the Preservation of SGP are working in extremely close cooperation.

(For a short and useful overview of the church history, see Abbey of Saint Germain des Prés on Wikipedia.)

Please describe the location, neighborhood, and visualizations of how the church blends in with its surroundings.

The church is and has always been, the central defining monument and lifeforce for an entire neighborhood which, uniquely in France, was named for the church (rather than the usual other way around). It remains by design the tallest building in the neighborhood and stands like a shepherd over the comings and goings of flocks of the faithful and many, many tourists and lovers of Paris.

The SGP neighborhood is ancient and remains today at the intellectual heart of the city, surrounded as it is by great numbers of art galleries, publishing houses, museums (including the Academy Française and the École des Beaux Arts), world-class restaurants and cozy cafes, bookstores, movie houses, and venues for music both classical and modern.

Why was the church slated for restoration? What are the restoration team’s goals?

The church is not in danger of falling down. Notwithstanding that, there has been in the 170 years since the last restoration an incredible degradation of artistic and architectural elements at SGP – mostly, but not exclusively, on the inside of the church. The works are proceeding by tranches and are about 60 percent complete, but funding for the remaining 40 percent is not in hand. We need to raise further dollars to ensure timely and integral completion of the project.

Who are the architect-of-record, project manager, primary and secondary funding sources for the project, construction manager, interior designers (if applicable), and anyone else who has had a significant role in the restoration?

The renovation project is being conducted by and on behalf of the City of Paris, the owner of the church. More specifically, the project falls under the auspices of the Ministry of Culture, Department of Historic Monuments. The master Preservation Architect in Chief is Pierre Antoine-Gatier of Historic Monuments department.

Please explain how this restoration differs from a renovation.

The dividing line can be subtle, an exercise in shades of gray. Notre Dame was, and now is owing to the fire, in full restoration mode because its outside physical envelope is in need of serious repair and replacement to preserve the integrity of the structure.

At SGP, the outside structure – though not in flawless form and thus in need of attention – is in reasonably good shape. (Exceptions abound however and will be the object of attentive work in the years ahead). Most of the current SGP project is devoted to (a) restoring architectural elements which have been damaged or depredated to the point of existential threat and (b) renovating artworks (of all kinds: in stone, in woodworks, in painted and sculptural works) to bring them back to their original form and sheen. So, the SGP project is a painstaking marriage of both renovation and restoration.

Why is the art in this church worth the time, effort, and cost to restore?

The SGP church is a unique and iconic example of Romanesque architecture. It houses world-class art and stained glass and sculptural works. It is the site of ancient and ongoing scholarship and research. It is the oldest church in Paris. It is universally recognized and universally loved. Proof of this is that so many people from all over the world have contributed and will continue to contribute to the restoration and renovation of this irreplaceable element of world patrimony. It has a secular and religious history that thrills and inspires. It is ethereally beautiful. It is a living church today, with many outreach programs in Paris, in France and around the world. Its music program is incomparable. Its thousand-year-old bells sound the hours today as they have for over 10 centuries.No

What was your first impression of the church?

My own first impression was that this place, this church, speaks to fundamental questions of the relationship of man to his beginnings and to his future. It is an intimate church, not overpowering. It whispers where others shout. After 15 centuries of history, we have received this church in trust and we are determined to pass it on and into the next 15 centuries of living history and inspiration.

How is the project funded?

As mentioned, the City of Paris owns the church and has provided 15 percent of the overall funding for the project. The remaining 85 percent of the cost will be borne by private hands – individuals in the main, many donors of small amounts in the main – from all over the world. The entire project has been priced out at approximately $7 million. Of the 60 percent of monies raised to date, some 40 percent has been raised in the United States. Currently, we are running low on funds and much more needs to be done.

What are a few of the setbacks, if any, the team has encountered and is the project moving along according to schedule?

It is particularly satisfying to note that the project is currently on time and on budget – a remarkable achievement for this kind of project. Again, our financial resources are today at a low ebb, so we need to redouble our efforts to reach friends of the church, of Paris and her history, and of the project to respectfully ask for additional support. Every dollar donated is a precious gift, hugely needed and immensely appreciated.

When you think of the finished restoration, what do you visualize?

The child is a father to the man. The works completed to date are breathtaking, extraordinarily beautiful and inspirational. And they suggest just how amazing the church will be when finally finished in 2021 or 2022. So, the best answer to this question is: just go. Go and visit the church and you will be able to see now what the works have accomplished and what they will provide in terms of linking us to the past and the future in ways that surpass our ability to merely explain in words here.

Is the church open now or closed to the public during restoration?

The church is now open and will remain so during all renovation works. There is no admission charge (except for during regular organ and classical music concerts, very well attended by locals and tourists alike). Some of the current works are cordoned off by scaffolding, ropes, plastic tarps, and the like, but these are extremely localized. The completed works and the areas to undergo future works are all fully available to all who come – so do go.1

How does the church plan to celebrate the grand opening or the completion of the project?

There is no definitive plan as to how the finalized project will be celebrated in two or three years. That said, last year, at the end of the third tranche (of seven), the City of Paris held a gala evening of thanksgiving and celebration under the direction of the Mayor of Paris who was there that evening. It was a night for the ages, grandiose and filled with meaning and vibrancy. Something similar will occur when all is done. It just remains to be seen what will be planned.

For a full view of the works completed to date and the works slated for completion in the years ahead, you can review the renovation catalog on our website.

Saint Germain des Prés stands out as must-see Paris architecture. Tourists say its historical significance and beauty are beyond words.