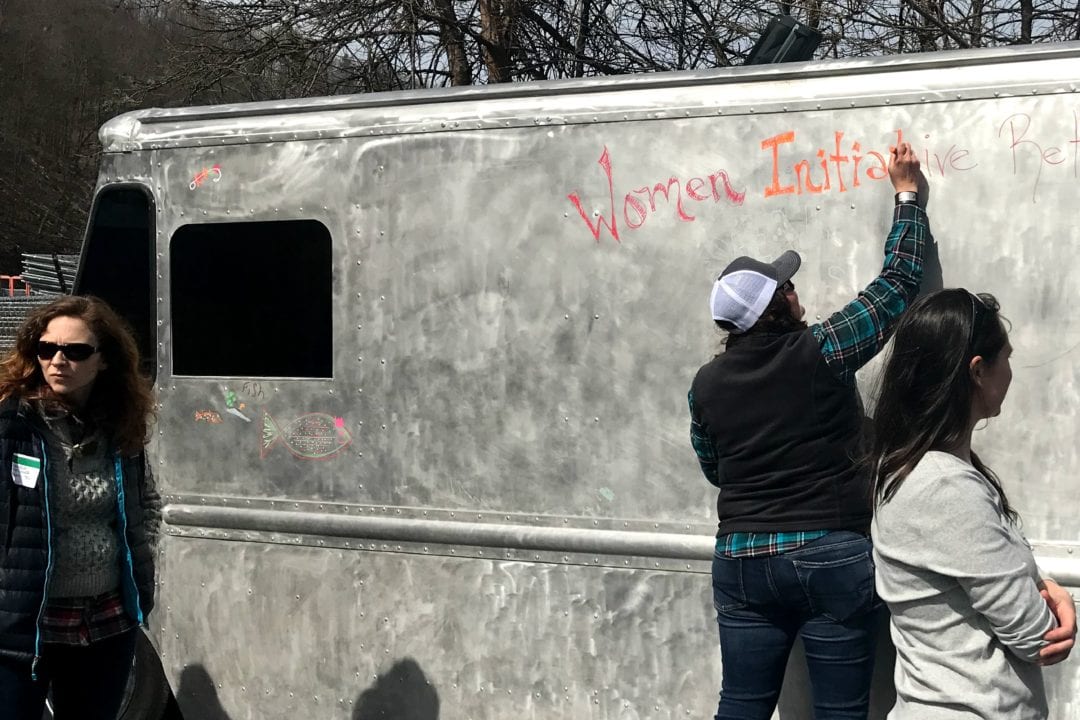 Daniel said, among the participants’ comments she heard throughout the weekend were, “Loved seeing more women connecting and working together to get more diverse audiences on the water,”  “Enjoyed connecting with Heather Hodson from WA via Skype – her ideas and enthusiasm are contagious,” and “Looking forward to next year’s retreat to see what everyone implemented in 2018.”

Daniel and Kelly Williams planned the retreat with the assistance of a steering committee made up of “energetic, passionate, and determined women” according to Daniel.

Together, they set the stage for 25 women from 13 TU chapters and 16 counties and other organizations across Pennsylvania to network, share ideas, and work together on ways to help connect more ladies to PA’s waterways through conservation projects, fishing and outreach programs. Participants identified and shared resources and ideas for new programs and events aimed at increasing future engagement among members.

“Icebreakers;” break-out sessions; the Costa SLAM Film Event; art; project and idea-sharing; fishing; casting; discussing barriers and solutions to implement programs; and a guest appearance by Washington State’s Women’s Initiative Ambassador, Heather Hodson, via Skype were among the activities offered throughout the weekend.

Daniel said she was impressed by the enthusiasm and excitement she witnessed during the introductions during the opening session.

“Many of the women expressed excitement when they saw so many other ladies interested in connecting to Pennsylvania resources through fishing or conservation programs,” Daniel noted. “When they introduced themselves each person began to realize they are not alone in trying to get more diverse audiences interested not only in fishing but also protecting the resources we all enjoy.”

The less experienced and beginner anglers soon found mentors among the group members. Daniel said, “The few that were new to fly fishing were quickly taken under the wings of women who had experience. Lots of ideas and experiences were shared.”

Rachael E. Grube, a Watershed/GIS specialist with the Eastern Pennsylvania Coalition for Abandoned Mine Reclamation and a beginner fly angler, was inspired by the passion so many of the women she met had for fishing and aquatic ecosystem conservation.

“Every woman there had a different story about how she became interested in Trout Unlimited or conservation in general, and I think knowing the reasons why a woman might decide to get involved is a key factor when targeting women as new members or volunteers,” Grube said via an email interview. “Everyone had new ideas about how to get even more women involved in fishing and aquatic conservation. Sometimes working in conservation can be discouraging, but hearing details about successful programs and events will allow me to plan future conservation programs more strategically.”

Joan Mead-Matsui is an award-winning freelance journalist; travel writer, photographer, and fly-angler from Clarks Summit, PA. She discovered her love for fly fishing five years ago and covers her adventures on her website joanmatsuitravelwriter.com and several publications.