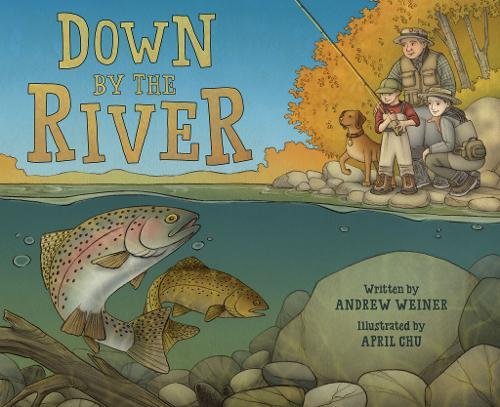 An Interview With Andrew Weiner, Author

When is the best time to teach your children and grandchildren to fly fish?

Read my interview with Andrew Weiner, the author of “DOWN BY THE RIVER, A Family Fly Fishing Story.” Andrew crafted the perfect Young Reader tale about one family’s fly-fishing trip.

“Art,” the main character watches and listens as trout dart by in the riverbed as his mother, perhaps, unknowingly, demonstrates her perfect cast. Meanwhile, Grandpa tells stories about fishing and family that enhance an already perfect day.

What led him to create DOWN BY THE RIVER? He explains in our interview.

How closely do the characters relate to your evolution as an angler?

They don’t specifically. I grew up in NY originally, and we would take family vacations to Maine, staying in a cabin at The Five Kezar Lakes in North Waterford. We would fish every day as a family–my dad, mom, and two sisters. It wasn’t fly fishing. When we moved to California my father and I continued fishing–deep-sea fishing and some lake fishing, and then eventually some stream fishing as well. I didn’t start fly fishing until probably the early ’90s, and though I continued fishing with my dad until a few years ago, until about two years before he died in 2017, we only fly fished together once. The story evolved from when I first started writing it 15 years ago, where it was a boy who wanted to go fish with his parents, to a story about fishing with his mom and grandfather. Part of what has generated so much support for the book is the mother being such an important part of the story as an angler. Orvis’s #5050onthewater movement coincided with the lead up to publication. Women fly anglers, particularly on Instagram, have been huge fans and promoters of the book.

What led you to tell this particular story?

It was a combination of things. Part of it is my love of fly fishing, part of it is my love for children’s books. I’ve worked in publishing since 1977, and even four years prior when I worked at the local public library during my last two years of high school. I also felt that there was an opportunity to engage kids in the sport and the outdoors and conservation through the story. The story evolved from what I described above, but it was my editor Susan Van Metre who helped craft it into a publishable story. Funny story–today is International Women’s Day, and last year I posted a photo of myself with my two sisters in a boat in Maine. I mentioned where we were and Susan saw the post, and it ends up that it’s where she goes fishing with her family now. It was meant to be.

To what extent is this sport a part of your life?

I am passionate about the sport and the places it takes me. Basically, all of my vacations for the last 20 years or so have either been fully focused on fly fishing or have at least had a small opportunity to fish. It has been interesting to reach out via Instagram and Linkedin to the fly fishing community. After years of being part of the publishing community, it’s been rewarding to become a member of the fly fishing world, known and appreciated by many folks because of the book and my commitment to the sport and conservation.

What do you hope young readers will learn from your book?

Several things. First is the joy of actually fishing and catching a fish. Second is how wonderful it is to share the activity with family and loved ones. The third is the value of the places where we fish and the importance of preserving those places across the generations. My ex-wife’s sister-in-law is a teacher and she shared the book with her second-grade class, and then they all did a project answering her questions about the book. One question was what is the lesson of the book, or what they most got out of it, and so many of them talked about Art not giving up after he didn’t catch a fish right away, so I guess that’s something kids will learn from the book, too.

Did you know the book would follow a particular format/plan?

I did have a clear view of the format of the book as a picture book, and even did a version of the text with suggested illustrations. Susan told me I should just let April Chu (I was so lucky she agreed to do the book) have her way with the illustrations, and the fact is it came out almost exactly as I’d anticipated. I did always plan to have the informational backmatter. It’s something that is common in Abrams kids picture books that adds value and depth. The flies on the endpapers grew from the original concept. I gave April 24 critical flies, but she got so engaged that she ended up with almost 80 unique flies in the front and back.

What role does conservation play in your life and how can we teach children to responsibly enjoy our natural resources?

I’m deeply committed to conservation. These are very difficult times with so many critical environmental regulations being obliterated. I think kids being in the outdoors is vital to the conservation and environmental movements, and I’m heartened by how many are already active. I support a couple of dozen environmental organizations myself. It’s one of the most important issues for me. Bottom line–getting kids into nature will make them stewards themselves.

Andrew Weiner is a longtime publishing professional and an avid fly-fisher. He lives in Albany, California.

Buy a Copy – Down By the River