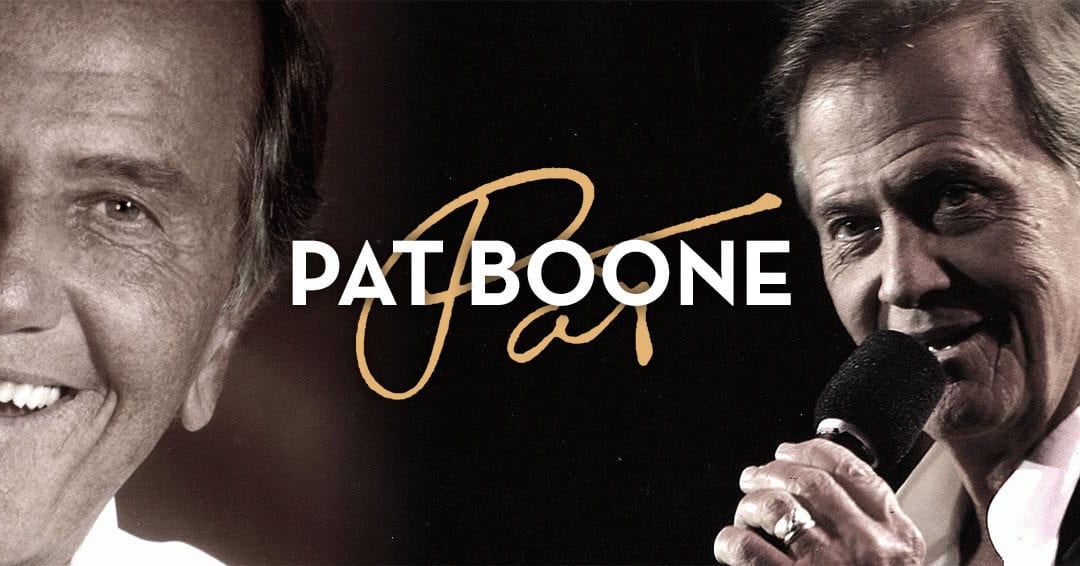 An Exclusive Interview with Pat Boone

Pat Boone was the first child born to Archie Boone, a building contractor, and his wife, Margaret, in Jacksonville, FL on June 1, 1934. He described his life growing up in Nashville with his parents and siblings – a brother and two sisters, as “wonderful” and “idyllic.”

Although no one in his family was a musician by trade, his mother played some ukelele and taught Pat and his brother to play some chords. Pat became known as “the Boy on Roanoke Rd” – “the kid who knows all the pop songs of the day and will come to sing for you with no strings attached.”

“We entertained our family at all our gatherings as we were headed toward our teen years.   So in the midst of my athletics and school and other activities, I became an amateur singer, a little dreaming that might lead to a career.” ~Pat Boone (via an email interview)

Indeed, a professional career followed – one that has endured more than 50 years. Pat is 83-years-old with a long list of accolades and recordings to his name; a record company, “The Gold Label” that’s dedicated to legendary and accomplished artists, (who incidentally, all come with million-selling gold records to their credit);  and he is regarded as the #10 all-time top recording artist, according to music industry magazine, “Billboard.” His career has spanned more than five decades. Read a full list of his accomplishments at patboone.com.

As much as music has been an integral part of his life from an early age, Pat says reading the Bible and attending church services are the backbone of his life, then and now.

I learned that the whole Bible from the first words in Genesis, “In the beginning…” to the last words from the book of Revelation in the New Testament…all the Bible was written by Jews about Jews and for Jews, and focused on Israel and God’s chosen people.

I should have been neutered or perhaps jailed – but my wife did become a great mother as well as a wonderful wife and having those responsibilities kept my feet on the ground when my career took off like a whirlwind, luckily 11 months ahead of Elvis and “Heartbreak Hotel”.

His affinity for music continued through his teens and adulthood. In late 1959, a love affair with the Ernest Gold melody to the movie Exodus and the theme song led Pat to put his faith and songwriting skills to work when he subsequently wrote the words “This Land is Mine,” the lyrics behind the esteemed show tune.  The song is referred to by many as “the second Jewish national anthem.”

How do his Christian beliefs tie in with his connection with Israel?

He explained, “We knew then, and I know now, that we Gentiles get in on this exquisite and unique relationship with God through our acceptance of Jesus the Jewish Messiah, the one who fulfilled all the prophesies of Isaiah about the One who would come to lead his people out of captivity and bless them more then all the people in the world.”

He further explained Christianity, properly understood is a direct outgrowth of historic Judaism and it’s clear that God wants every believer to understand our “Jewishness” as well as our Christianity and the word. Christ, he noted, is a Greek translation of the word “Messiah” or God’s anointed one.

“When I’ve spoken to groups of Rabbis in the past, I tell them I’m representing the 4th branch of Judaism; there is Orthodox, Reformed, Conservative and Messianic.  Everything we believers in Jesus hold sacred and true is a direct outgrowth of the Bible which deals ‘explicitly with Jews and God’s promises to the people of Israel.”

According to Pat, Israel Prime Minister, Benjamin Netanyahu, a longtime friend, has said on many occasions, “Evangelical Christians are Israel’s best friends in the world – we know that.” He and the Israel Prime Minister got to know one another during an Israeli water function at the Beverly Hills Hotel.

“He (Benjamin Netanyahu) became of fan of mine when he was at M.I.T. in his college days, and loved my record of ‘Speedy Gonzales.’  We’ve been good friends ever since,” Pat remarked.

Although the prime minister was not able to attend Pat’s Tel Aviv concert three years ago for security reasons, Pat met with him privately, “just the two of us at his request, the night before in his office in Jerusalem,”  he says. When Pat walked into his office they shook hands and Netanyahu said, “Hello Speedy, come on in!”

“And the beaming smile on his face made some of my Israeli friends jealous.  Our friendship is real, deep, and based on our understanding of God’s expressed intentions for his chosen people…,” says Pat.

Pat has joined forces with Rabbi Yechiel Eckstein, an Israeli American Rabbi, and the founder and current president of the International Fellowship of Christians and Jews headquartered in Chicago and Jerusalem, as they host a most memorable “Historic Pilgrimage to the Holy Land,” a 10-day journey that will depart North America on May 9, 2018.  In addition to sightseeing opportunities at some of Israel’s most cherished sites, the tour coincides with the actual 70th birthday of the modern state of Israel and the dedication of the U.S. Embassy on May 14. As part of the celebration, Pat will film a TV special in the Roman amphitheater in Caesarea for national and international distribution.

He referred to the tour as “a loving seminar in the things that we hold in common, much more than things that might divide us in understandings or beliefs.” The trip is a historic pilgrimage designed for Christians and Jews, with sites selected that are of particular interest to the Fellowship of Christians and Jews and “we” the believers in Jesus as the Messiah.

“We believe that everyone who comes back from this tour, whether invited by Rabbi Eckstein or me or a couple of other co-hosts, will have a lasting and permanent sense of identification to Israel, the Jews, the one God of the Bible and the sense of destiny that unites us.”

Together,  he and Rabbi Eckstein’s collaborations have helped to fulfill God’s prophecy by paving the way for tens of thousands of poor and persecuted Jews from all over the world to return to and settle permanently in the land God promised to Abraham, Isaac, and Jacob. Their efforts, particularly a television special Rabbi Eckstein and Pat co-hosted, prompted the Christian community to donate tens of millions of dollars to relocate and care for the displaced Jews in modern Israel.

From his days as a budding entertainer on Roanoke Rd. to his humanitarian work in Israel, Pat believes God will continue to bless his efforts if they’re good and ensure the happiest life he could possibly live.

“I’m convinced God won’t let horrible things happen to me. If all young people today could have that kind of assurance we would have a better society.  And most psychiatrists would be out of work.” ~Pat Boone

For details about the historic pilgrimage, visit http://patbooneisraeltour.com. Registration is limited to 200 to 300 tour members. 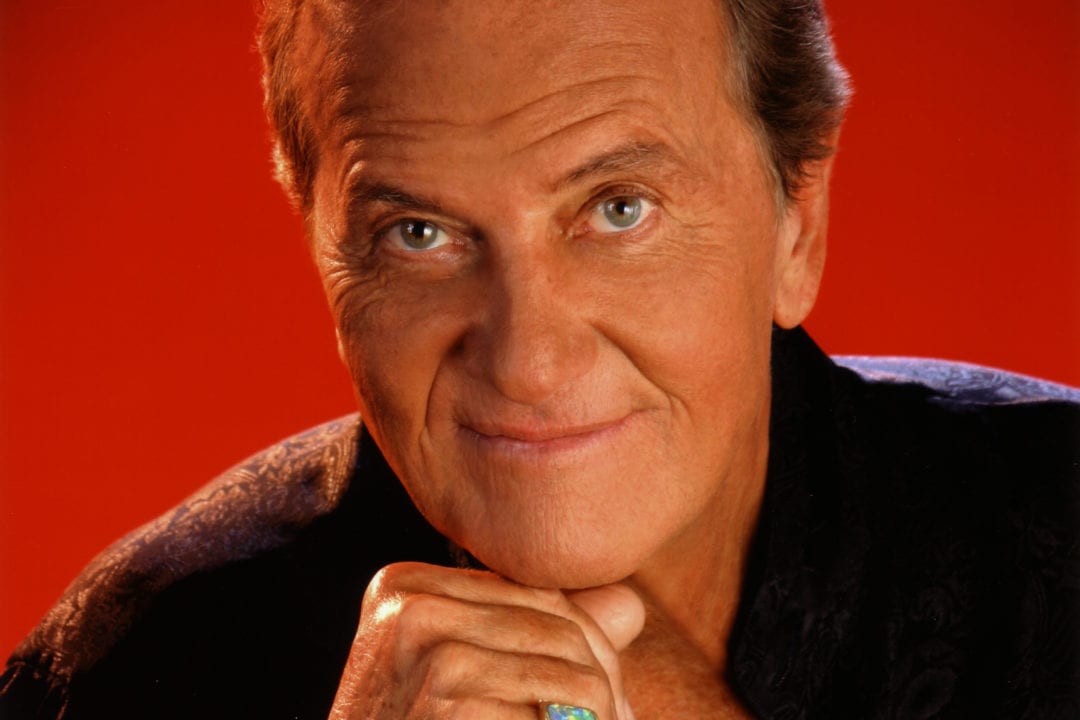 Imagine following Jesus’ footsteps to historic sites where he walked, taught, and lived.

If you’ve never been to Israel or this historic destination is on your bucket list, legendary singer, former teen idol, composer, actor, writer, television personality, motivational speaker and spokesman Pat Boone is inviting 200 to 300 special travelers to join him on a 10-day “Historic Pilgrimage to the Holy Land” May 9 – 18, 2018. Boone has visited Israel more than 20 times and refers to this adventure as his last proposed trip there. Boone says his guests can count on the trip to be “first class in every way,” with an opportunity to be part of “history in the making” in Jerusalem on May 14, when the U.S. Embassy is dedicated during the 70th birthday celebration of the modern state of Israel.

“We’ll be doing a TV special in the Roman amphitheater in Caesarea for national and international distribution,” Boone said via an email interview. “We and all our tour members will not only be there for the celebration of 70 years and God’s fulfilled promises to Israel, but we’ll also be in Jerusalem when the U.S. Embassy location is dedicated.  WE’LL BE A PART OF HISTORY AS IT OCCURS.”

Boone and Rabbi Yechiel Eckstein, an Israeli American rabbi and the founder and current president of the International Fellowship of Christians and Jews headquartered in Chicago and Jerusalem, along with other hosts, will lead the tours to the most significant places in Israel.

“The tour is a unique opportunity for Christians and Jews to follow Jesus’ path as brothers in our faith and the one GOD,” Mr. Boone explained. “Rabbi Eckstein is making sure that we will visit sites that are of particular interest to the Fellowship of Christians and Jews but also Jews will visit the sites that are of particular interest to we believers in Jesus as the Messiah.”

The “Historic Pilgrimage to the Holy Land” will feature days of breathtaking sightseeing with Mr. Boone and Rabbi Eckstein that also includes spiritual guidance by Dr. Richard Lee, editor of The American Patriot’s Bible, a Rendition of The Exodus at Masada with details covering how the song was written; an opportunity to explore Israeli cuisine during the daily breakfasts and dinners (in Israel); roundtrip air transportation from from New York City, NY (JFK) or Newark, NJ (EWR) Airports;  Baptisimal in the Jordan River; deluxe and first class hotels; professional, English speaking Guides; deluxe land transportation via private motor coach (with Wi-Fi on the bus);  tips, ($85) taxes, and fuel surcharge ($685) included; entrance fees to all sites along the journey; and a boat ride on the Sea of Galilee and cable car ride up Masada.

A full itinerary and additional details with pricing can be found at  http://patbooneisraeltour.com.