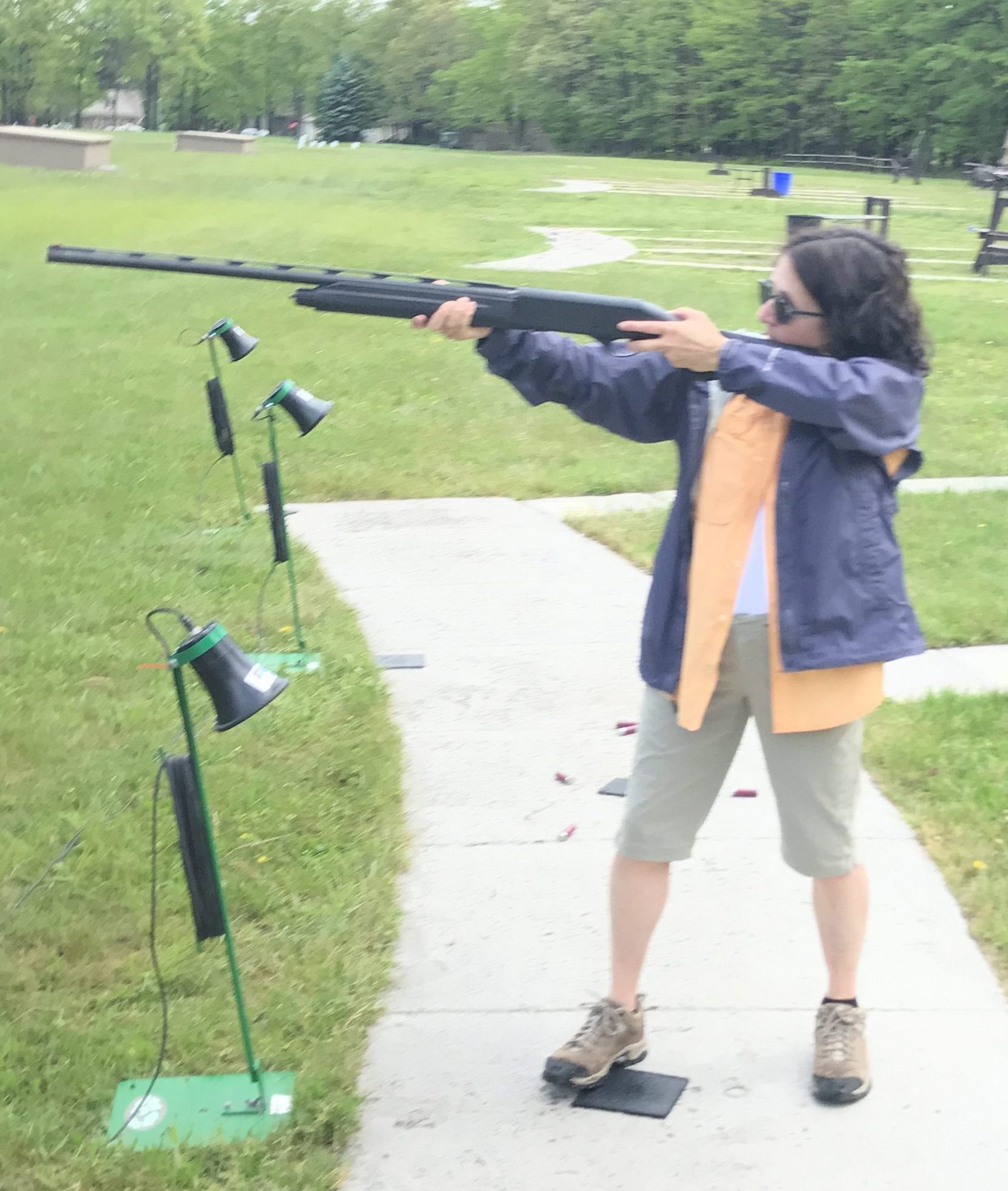 When you meet Mike Possinger, you’ll understand why the Pocono Manor Resort & Spa  “Cast & Blast” package is so much fun.

Pocono Manor Resort & Spa’s consummate manager of Manor Sports delights in introducing folks to trap shooting and fishing. They happen to be two of Possinger’s specialties, but the package can be tailored to beginners or more experienced folks who want to fine-tune their skills.

Cast & Blast is one of an assortment of “Stay & Play” packages available at Pocono Manor, a historic inn located in Pocono Manor, Pennsylvania.

According to Possinger, the original plan was to offer Cast & Blast as a Father’s Day promotion but his idea soon evolved into an all-day event that’s perfect for families, couples, and groups.

“It took off,” Possinger said. “The opportunity is right here. You’re going to shoot right here and go a half-mile away and fish in another.”

Creating moments that result in smiles and laughter are among his goals and this year marks the first time Pocono Manor formally marketed this “Stay & Play” package to guests and non-guests. Overnight lodging, breakfast, three hours of fishing, and an Intro to Trapshooting rates start at $199 per night. A resort fee and tax are not included and reservations are required.

“Pocono Manor Resort & Spa is a huge draw to visitors, positively contributing to the tourism in the Pocono Mountains. With so many catered packages and onsite activities like fishing, horseback riding, archery, biking, seasonal events, and in the winter even horse-drawn sleigh rides, snowmobiling, and ice skating, Pocono Manor has so much to offer for all tastes. The resort’s renowned golf course and its serene spa provide even more entertainment to guests. With so much to do, we find visitors returning to indulge in their other activities season-to-season.”

I recently sampled the trap shooting and fly fishing package during a two-day assignment sponsored by Pocono Manor Resort & Spa. Cast & Blast includes about an hour of trap shooting and two to three hours of fishing, but experienced anglers who want to spend more time on the water can fish at the on-site streams for hours.

Possinger is certified through the National Rifle Association (NRA) for shotgun and pistol handling and will devote as much time as needed to be sure participants are comfortable handling a gun. He provides full instruction, covering topics such as gun safety and proper ways to hold, aim and shoot and he’ll tailor a package to meet the needs of families, small groups or corporate clients. Prices will vary, depending on how much casting and blasting you want to do.

“It’s one of those things you don’t experience every day of your life in your own backyard, so we try to make everyone comfortable. People want to learn how to handle a gun,” Possinger said.

Participants must be 12 years and older to participate in that particular package, but Possinger said he’ll be happy to “dream up all sorts of games and activities that will keep everyone happy.”

“If that’s all it takes to make them (people) smile, why not do it? I’ve been at Pocono Manor for a long time and I want you to have fun. I’m the ‘bartender” or ‘beauty salon’ out here.”

Possinger joined the Manor in the mid-1970s as a snow-maker when the manor’s ski program was in operation. Following college and years in politics, Possinger learned the Manor Sports director’s position was available.That was 12 years ago.

“I don’t complain about getting up in the morning and going to work. I go and it’s one of those things that happens when you find a once-in-a-lifetime job.”

Since then, he has catered to guests, including countless individuals with special needs and circumstances.

“Years ago, a guest (a lady) had a bucket list. She was terminally ill and in a wheelchair. I built a tripod and made it so I could set it across her wheelchair. I made a holder that set on her wheelchair and she could turn the tripod and just pull the trigger. She told me, ‘I can’t believe I’m doing this. Situations like that are very special to me.”

I spent my second day at Pocono Manor fly fishing in a stream on the property, along pristine “catch and release” water. The on-site stream is only available to registered Pocono Manor guests. A valid Pennsylvania fishing license is required for anyone who plans to take fish from the property.

Pocono Manor Resort & Spa is now the only resort in the Pocono region with the ability to host ATA-member only sanctioned registered shoots.

You can reach out to Possinger and find additional Cast & Blast information at poconomanor.com/manor-sports. 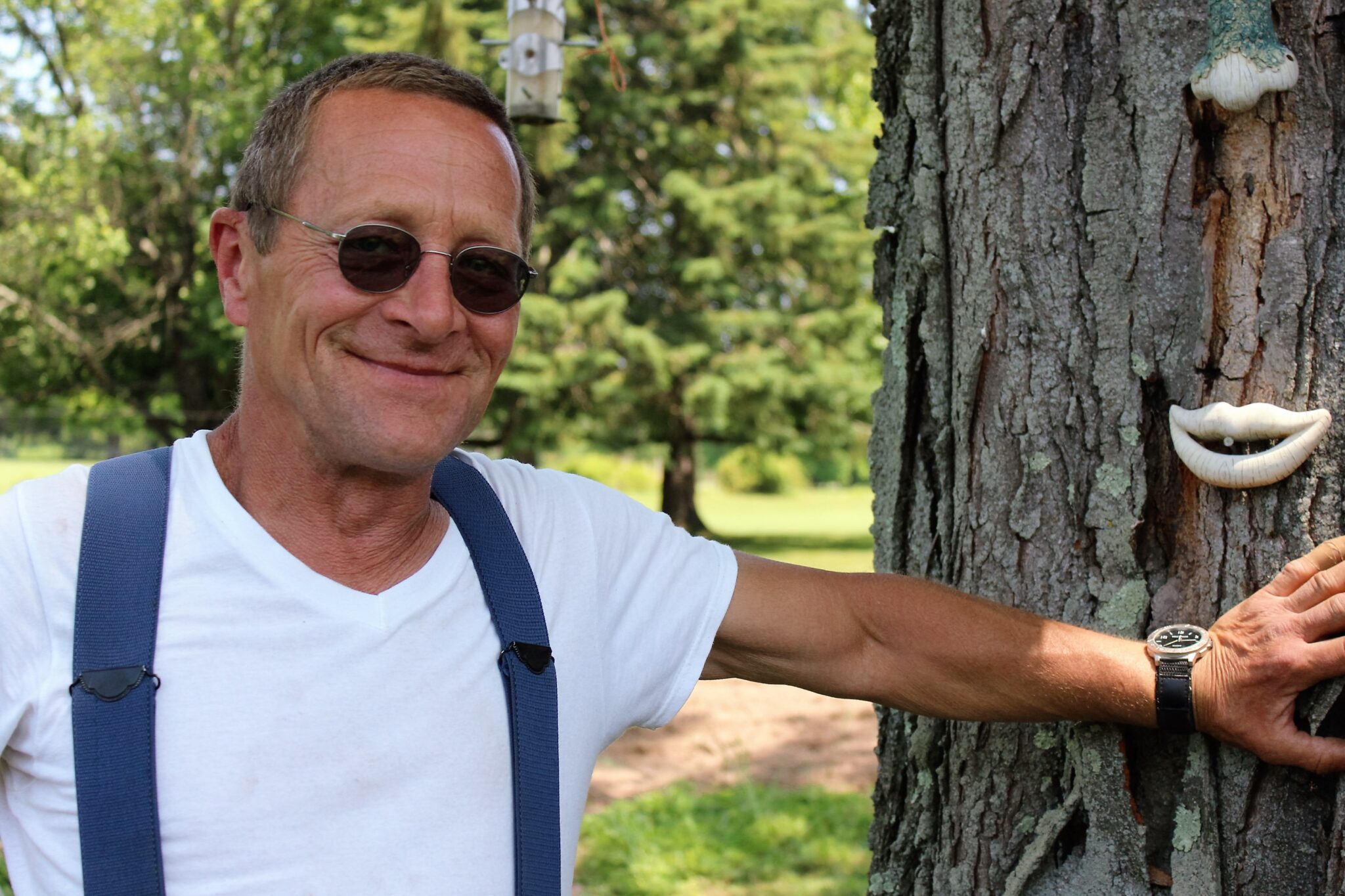 “Garden Doug Z,” also known as Doug Zimmer, cultivates many varieties of plants in his gardens at Shawnee Inn and Golf Resort, Shawnee on Delaware, Pennsylvania.

His craft is to provide Shawnee Inn guests with the freshest farm-to-table produce and vegetables.

Zimmer is the lead gardener at Shawnee Inn, formerly Buckwood Inn, a historic inn with a well-established reputation for extraordinary customer service and lodging and championship golf courses. The Shawnee Inn guests know today is due in part to visionary Charles Campbell Worthington. According to Shawnee Inn history, Worthington was an engineer and inventor by trade, who never enjoyed urban living. Soon, after discovering the great outdoors at Shawnee on Delaware, he relocated to this quaint, small village in the Pocono Mountains of Pennsylvania and “made his mark in the community.”  Current owners, Charles and Ginny Kirkwood and their family, are also advocates for sustainability and preserving natural resources.

Garden Doug Z is an experienced gardener and is highly-regarded for his vast knowledge of horticulture. He carries on the Shawnee tradition of “fresh food from the gardens on premises” and outsourcing, only as needed, from nearby farms.

Here’s a quote from the Shawnee Inn history archives.

“The food served in the dining room came fresh from gardens on the premises and nearby farms, an on-site creamery provided fresh milk, cream and butter and drinking water of the purest quality was gravity-fed directly into each room,” according to Shawnee Inn history.

I met Zimmer in early June, while I was a glamping guest at Shawnee Inn. Upon meeting him, I asked my host, Kaitlyn O’Connor, Shawnee marketing coordinator, if I could interview him and snap some photos of Doug alongside his various gardens. Little did I know, he is also the lone gardener.

Zimmer quickly noted, “It’s really not hard to be the lead gardener when you’re the only gardener.”

Sure, he gets help from management when he needs it, but Zimmer added, “I’m pretty much on my own a lot of the times. Today, I needed help with tilling.”

What is the origin of his nickname?

He said, “Some girls gave me the nickname Garden Doug Z.”

How many acres does he farm?

He’s not sure, but I can attest that rows of vegetables and herbs are methodically interspersed in several tracts of land that border the Shawnee golf course. One of his gardens is situated along the golf course, with a spectacular view of the Delaware River.

“I can tell you how I grew tomato plants 30 years ago but I really have a problem with people’s names and acres.”

Elephant garlic, onions, cabbage, tomatoes, and kale are among the varieties of vegetables he plants and cultivates each year.

All of his plants are grown from seed but he noted he is also blessed to have access to a greenhouse. “We don’t bring out the plants (from the greenhouse) until the weather settles down.”

As we moved to the herb garden that was brimming with healthy, nurtured plants, Zimmer graciously handed me a sample of his “Mountain Mint” crop that flourishes in his herb garden.

“The medicinal property of the mint is it’s an “antispasmodic,” he said.

And as he pointed to the chamomile, he explained,

“I think I’m happy and sedate enough that I don’t need the chamomile, but I’m very intrigued by medicinal plants. There’s an actual sedative in that stuff and that’s pretty cool.”

His affinity for horticulture developed at a young age.

“I couldn’t eat an apple without planting the seeds,” he said.

Zimmer admits his gardening is a compulsion.

He quipped, “I had it so bad in years past when I put all of my tropical, succulents, and jade plants inside for the winter. I couldn’t sit in my living room. I couldn’t get into my spare bedroom. So, two years back, I said to myself, ‘Doug, this is a sickness and you’ve got to have a 12-step program.”

Zimmer is a generous soul

He’s also known for giving plants away and converting a lot of people who believe they have a “brown thumb.” His advice to those folks is “You’re just a beginner and you’re growing the wrong plants. I have some plants for you that are hard to kill unless you put them in the oven at 350 (degrees).”

“You reap what you have sown”

Sustainability is widely practiced at Shawnee Inn and Golf Resort and Zimmer’s goal is to utilize more seeds from his gardens and use natural compost materials to ensure the gardens are as organic as possible.

“We use composted leaves and mix some of the (ShawneeCraft) brewery stuff in there,” Zimmer said. “It’s definitely the compost that makes a difference.”

While heirlooms are very fickle to grow, Zimmer plans to add other heirloom cultivars of tomatoes to his repertoire. Ultimately, taste is the deciding factor that trumps everything.

“If it tastes good, I’ll bend over backward to get that. I’m very proud of that. Through the years, it (the plant) has got to evolve.”